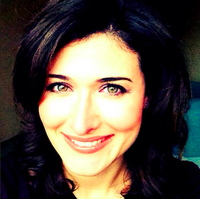 Amy Guth, president of the Association for Women Journalists-Chicago, likes to keep busy, even if she doesn’t necessarily like “the cult of busy” (more on this below). She’s hosting a new show on WGN and producing a documentary on the verbal abuse women face online. Here she talks with AWJ about her start in journalism, introduction to feminism and the magic of covering big, breaking news at the Tribune.

It sort of feels like you always have so many latest projects that it’s hard to know where to begin.

That is totally by design.

So why don’t you tell me about “The Saturday Night Special”?

It’s going to be in the 7-9 p.m. time slot on WGN. Rather than the traditional approach where you book guests and you keep them for a second or two, this is going to be more like picking a theme every night and having a big, longer conversation about it. There a lot of multimedia elements, there will be some recurring correspondents on certain topics. There will be a variety of topics from food and dining to a political one – obviously, it’s an election year. A lot of technology. It will vary ever week, and I just hope to have great experts and great people. There will be a lot panels.

Also, you’re working on a documentary about trolling. What’s the most interesting thing you’ve learned so far in your reporting?

There’s a different level of responsibility to my sources, and my interview subjects, just because the styakes are so high because some people are talking about some really personal and dangerous things. I’ve asked everyone that I’m interviewing on camera to select a location for the interview that would be meaningful and powerful to them, and that’s been so amazing. That has run the gamut from everything to you know, I was getting trolled so badly I ended up not running the marathon, so let’s go to where the finish line would be,” to “here’s the site of where I was assaulted” because there are some things where online things escalated to offline, in person assault. But then there are some fun things that are kind of silly. I’m interviewing someone in a sex shop because it’s relevant to her story.

You have all these projects, and yet I noticed that you wrote a blog post about rejecting the cult of busy? What exactly do you mean by that and why do you reject it?

Because I think that we are conveying value and mattering to each other by talking about how much we’re doing. Sometimes you can be extremely busy, but not actually doing anything, and you’re not actually accomplishing anything. I have had jobs like that, where there was a lot of putting out fires but at the end of the day you’re going, “Did I really do anything that mattered?” I don’t mean to be cheesy, but I have to be, and I think we should be more. I think of Mary Oliver and her line about what are you going to do with your one "wild and  precious life. "That sits on my heart when I feel like days and weeks and years are frittered away by spreadsheets, and putting out fires. None of this got into this industry because we thought it would be awesome to fill out a form. We all got into this because we wanted to make the world better, and I realized that busyness is robbing us of that. I learned this the hard way. I went through a very busy period in my life, and I had way too much going. I tend to like having a few things going at a time, but it started to have a phsycial impact. I wasn’t sleeping, I was always getting sick, but then some bigger health issues started to surface for me that made me stop and say, “Whoa, time out, what the hell am I doing here? I’m really stressing myself out here -- for what?” and as I started to look at my life I realized a really clear truth, that I wasn’t making time for things that really mattered the most to me, and I was getting my time sucked into putting out fires, and not going and doing big things.

Do you ever miss it, though? Red Eye and Metromix and being publisher and general manager?

I miss being in the newsroom. That was the fun part.  Red Eye was a cool adventure I went in with some very clear goals on my to do list. If I go into everything with a plan, even if I don’t know all the steps, I kind of know, “Here’s the target I want to hit.” I went into it with some clear targets, and it was a challenge because no one from editorial had ever taken that job, and I walked into the boss’s office and I said, “Hey, I know you want to hire a sales person for this job, but here’s what I can bring to the table,” and he said yes. And I learned a lot. I had been bitching pretty loudly in my six at the Tribune about there being not enough women in leadership, and at one point I just had to go, “Well, I can bitch all day or I can do it,” so that’s what I did.

My favorite times at the Tribune was when huge news would break and suddenly everybody knew exactly what their purpose was, and we all sprung into action, and we all knew what to do next, and we’d all work together, and it all just was magic. Even in the online form, it was still the daily miracle.

When did you first want to be a journalist?

When I was about seven, I received a typewriter from my parents because as soon as I could talk and write and read, I was being a reporter. I had a little household newspaper that I did with pencil and a ruler and paper. Then someone gave me a piece of carbon paper, which was exciting because I could make two newspapers at a time. Then I got this typewriter and really increased my production and it was very exciting. I have that typewriter tattooed on my shoulder. I never made the choice. I just always did it.

What about being a feminist?

I know the exact moment I became a feminist. I have a lot of really interesting female characters in my family. I don’t know that anyone in the generations above call themselves feminist, but I’ve got all these crazy characters, eccentric ladies who were just kind of bad-ass. So when I was about 14, one morning my mom woke me up. She said, “Get up, we’re going to something I need you to see,” and she took me to a pro-choice rally. Obviously there was great opposition there, pro-choicers and anti-choicers. I think my Mom had made this sign that said, “If you can’t trust me with a choice, how can you trust me with a baby?” or something like that. I remember thinking very clearly it was the first time I had ever heard women yelling. It was really exciting because it felt like they were fighting for something bigger, and that was really cool to me.

This interview has been edited and condensed.